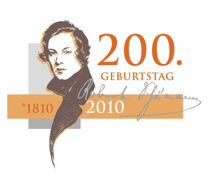 In 2010, to mark the occasion of the 200th anniversary of the birth of Robert Schumann, born in Zwickau on 8th June 1810 as the sixth and youngest child of the writer, bookseller and publisher August Schumann and his wife Christiane, particular attention was paid to Robert Schumann and his music all over the world. Tribute had already been paid to Schumann in 2006 in commemoration of the anniversary of his death 150 years earlier, with ground-breaking exhibitions and publications and, of course, special programmes in public concert life. For instance, in 2007 and 2008, pioneering scenic performances of “Scenes from Goethe’s Faust” (conductor: Franz Welser-Möst; direction and staging: Hermann Nitsch) and of “Genoveva” (conductor: Nikolaus Harnoncourt; direction: Martin Kusej) were given at Zurich Opera House, partly becoming the subject of very controversial debate, which were an absolute success with the audience and also experienced a broad reception and coverage by the media.

For 2010, the Schumann towns had prepared a splendid and closely coordinated Schumann programme with alternating focus on time and content related aspects. Although particular attention was paid to the activities of the Network Members of the Schumann Forum, and the Schumann Network overall aimed at attracting as much feedback as possible to its “own” events, the basic concept both of the Network and its Portal was (and, of course, continues to be) to provide an overview of all Robert (and Clara) Schumann related offers, if ever possible.

This is why collaboration and cooperation with other institutions and organisations has been and is so very important to the Schumann Network. For this reason also, all events with a relation to Schumann “throughout the world”, if ever possible, are listed in the calendar of events 2010 (see above) and the constantly updated online preview of events.

In 2010, over 2.5 million visitors from around the world had a look at the Schumann Portal www.schumannportal.de and the Special Page www.schumannjahr2010.de.